The first thing I do when I get to the rink, is check out the ice even before I check in with the desk
If I'm lucky, I'm the first person on the ice,

Then the manager gets up to his office and turns on the music.
Good ice spoiled.
Posted by Babbette Duboise at 10:09 PM 2 comments:

This week I ran through my FO3 for Miss Bianca and she pronounced herself satisfied. They're far from perfect (I've got some checking issues) but they're strong and consistent.

Then Miss Bianca said, "Let's work on you FI3."

You know, lady, give me more than 3 seconds of happiness before you introduce fresh hells into my lesson.

Anyway, she had me start doing FI3. I'm all ass over teacup.
Then she ran me through two footed brackets and back threes.  If she'd asked me to do them one footed, I'd have said no. 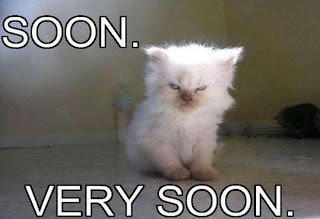 After I recovered from my knee problem, I'd been off the ice for 4 months, and only poking around delicately at skating for 2, when I realized I had the leg muscles of yogurt. Now age and weight wise I'm probably at the extreme end of 'people who skate'. But I've noticed a lot of skaters (kids included) don't skate continuously. They do a few elements, then stop and do a few more. Only the most determined are continuously on the move.

So a couple of weeks ago I started lap skating. This means continuously skating, no breaks for an hour. Forwards, mostly, due to crowding on public. But if it's light, I'll go backwards.

When I get off the ice, I'm like this:
But on the other hand, after the third session, I was delighted that not only had my leg strength returned, but my power and  skating skills were better too.

The downside of lap skating is the tedium.

But I notice that I now skate with more power and better confidence.
The trick to lap skating is having a playlist to set the beat for your stroking if your rink will let you wear earphones. Run through your music collection until you find music that makes you do this:
You can also check the Podrunner website for some free podcasts cut to specific beats per minute.

What am I listening to now? Some Queen, a couple of Kanye West songs, some Hans Zimmer soundtracks, and some workout music cuts.  Whatever you like is what suits you best. 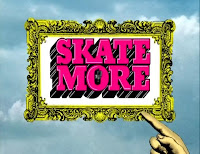 Now that there's a lot of humidity where I live,  I noticed that my boots were starting to stink.

First I tried putting those balls you put in sports shoes in my boots. All that did was put a scent to cover the stink. And the scent wasn't very pleasant.

What I needed to do was either get a mechanical or chemical dehumidifier for the boots.

There's lots of boot driers on the market. Usually these are long tubes connected to a fan. Some are electrical heaters that you insert in the boots. If I was skating so much that my boot sweat was really bad, I'd go for the mechanical solution. I had a friend who poured sweat out of his boots after skating. I gave him a boot drier for his birthday, and it worked fine.

I don't sweat  in my boots that much, so I decided to go with a chemical dehumidifier.

My big box store had a sale of Pingi sachets. These are similar to the dehumidifier packs you find in new purses, or sometimes packaged food. Those packs are the sized of a thumbnail. The Pingi sachets start at the size of your fist, and work up.

I threw a 150 ml Pingi sachet into my boot bag, and it worked miracles. Boots stopped stinking 24 hours later. You don't have to put a sachet into the boot, a 150 ml sachet is designed for a chest of drawers, so it can easily handle a boot bag. When the Penguin changes color, just follow the directions and pop it into the microwave for a few minutes. That dries it out and it's ready to go again. 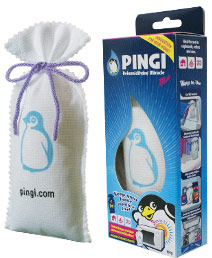 So there's your little skating tip for the day!
Posted by Babbette Duboise at 7:43 PM 6 comments:

Email ThisBlogThis!Share to TwitterShare to FacebookShare to Pinterest
Labels: skates

Mostly, I'm the beloved adult skater who helps out with the club, stays out of the younger (faster) skaters' way on freestyle, and smiles a lot when I'm on ice. But occasionally, I run into someone who just can't stand adult skaters. This experience happened in 2008.


Alas, this is my last Xtranormal video. The animation service is closing down in a few days.


Posted by Babbette Duboise at 8:09 PM No comments:

Like many rinks in the summer, mine has an evening public session. Ours is right after a freestyle, so when I step on the ice, it's filled with pretty much the same people that skate on freestyle.

Then I realize the rink is quiet. No music at all on the loud speakers.

Dance Coach is teaching students. And somehow, he has convinced the rink to give him control of the music on a public session!

And the without angry music playing, the annoying little hockey boys are pleasant and polite.

Good on ya Dance Coach!

So my skating club sent out a notice with rules about wearing a vest and signing up in order to get your music played.

This is a delightful change of pace from all the rinks around here. Sometime last year vests disappeared from all the rinks I skate at, even the ones that had enforced their use. As I've said before, being a visitor to a freestyle requires both psychic powers and the observational skills of Sherlock Holmes.

When I visit a rink, I like to see this.

So, after the big announcement about vest wear, I showed up for freestyle at my rink. And yes, you know what happened.
Our poor club president. She's fighting an uphill battle on the vest thing.


On the good side, between the club president and our lovely skating director, on ice etiquette is so well enforced I've never seen an accident.

We're polite too. No matter what happens. 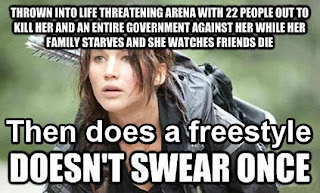 Stuff I Hate On Ice.2

Madam Mim wants to video me to show me something I'm doing wrong.

My experience of looking at myself in video while my wrongness is pointed out by an eager coach is always like this:


Then after I did a bit of 'performance business' in my skating Madam Mim exclaimed, "Are you sure you don't want to compete?"

After watching a video of my skating, I can only envision my skating performance one way.

Ideas, I have ideas! Sadly most skating organizations rely on the skating clubs to post pictures on a bulletin board. You have to really, really want to skate to read those. To build skating the organizations need good professional signs and posters.

Now, the situation below never happened. So, not one of the kids at my rink. But a few years ago I came across an example of "the annoying little skater". You know the type. They learn crossovers then proceed to tell everyone how to do it. Or you do something, and they want to be all superior about it.

Now good manners won't let us tell kids the truth of what's ahead of them in life (work! bills! Mortgage! co-workers! the Boss!)  but wouldn't it be fun sometime, just to do it once?

And, kid, no matter what you do, you'll get fat.
Posted by Babbette Duboise at 3:27 PM 3 comments:

You're skating on public, and you hear a catchy song on the speakers. It shakes you; It bakes you; You want to slither on the ice like a snake on the make.

Well, maybe not that last one.

So, I skate and get the rhythm of the beat.

Memories of my youth are expressed as movement: 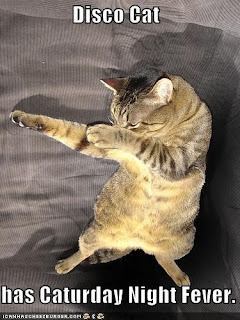 My old dance coach is in a lesson with an eight year old. He sees me and he looks like this: 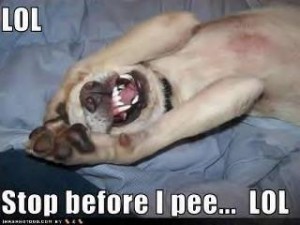 Then he yells after me, "When you start ice dance again?"

Posted by Babbette Duboise at 10:57 PM No comments:

My First and Second Spin

When I was in LTS back in 2008, a coach teaching Adult Gamma taught a group of us how to spin. I don't remember her instructional technique, but first time I tried I did a forward spin with 3 or 4 complete rotations. It was beginner's luck.

I could feel the rocker, and the spin was solid, centered and beautiful. I remember thinking, "This is how Johnny Weir feels every day." Please don't make fun of me for that.


From that day til today, I have not been able to do a successful one foot spin.

So I went to freestyle, expecting it to be empty, but figure skaters have no holidays. It was full. At the end of the session, I was practicing my two foot spin (which has a definite sucky quality). On the spur of the moment I decided to do a 3 turn entry, and hold the free foot off the ice on the back edge but not check it.

So, yeah I did a back spin.

No charge for the wobble the second time I did it. Man, two spins in a row is my limit!
Posted by Babbette Duboise at 2:21 PM 4 comments:

Email ThisBlogThis!Share to TwitterShare to FacebookShare to Pinterest
Labels: spin

And the "other" expression:

The "other" expression is actually hiding deep emotional turmoil:

With my issues regarding checking, Madam Mim ought to be reaching for the bottle right ..... about.... NOW!