I glanced at the rink clock. My lesson would be over in 1 minute and if I could keep her talking, I wouldn't have to try them out.

The idea of attaching one end of a cord to my boot and holding the other end of the cord in my hand while turning terrifies me.

"Of course many people are initially terrified by Champion Cords," she said, 'But I can assure you, you won't get tangled up in them." She was very firm about that.

The clock hit 30 after the hour and I almost shoved her off the ice. "You've had a long day. It's been a good lesson. See you next week."


So, I guess Champion Cords are in my future.
Posted by Babbette Duboise at 4:25 PM No comments:

It's always about the hips, isn't it?

I'm working on my back power pulls with my coach.

"Put your hips into it." she says. "Arms stay still, move below the waist only."

I came to a halt. "Wait, will this make my butt any bigger?" I ask.

My coach paused for a moment. A real Nicholas Cage moment.

"It will firm up your backside muscles," she says diplomatically.

Just like everything else in figure skating.....why do I even ask?

Posted by Babbette Duboise at 11:04 AM No comments:

When you do a hard, tight two foot turn, then feel your iphone fly out of your unzipped pocket and hear it skitter across the ice

The group coach is new, and has never met me before. "Show me your spin," she says.

I do a 2 foot rocker into back cross into a counter clockwise spin. Pick up the free foot and do two rotation 1 foot spin.

"Hmmm," the coach says, "Do only one rotation two footed, you're lifting your foot on the second rotation."

There's a funny thing about rockers, I can never remember which direction ends up being the one to start on to get a particular spin direction. I pick one, and realize it's my alternate direction spin. But, I pick the foot up on the first rotation...so there!

The coach is puzzled. "Did you just do a spin in the..............opposite direction?" I'm almost certain, that in that long pause she had to keep herself from saying "wrong direction."

The coach gathered herself together and in the way people do when they want to discourage some behavior asked, "Why?"

"Because it's my ONLY trick!"

Mr Badass Skater does a Lutz. It's not his best. Since our real coach is working with another student, I turn on my 'fake coach' act. "Would Paul Wylie skate like that? No, Paul Wylie would go out and perform that jump. Head up, smile, project!" I get an eyeroll, but Mr Badass goes in for another Lutz. He wipes out sorta like this. Lots of hopping around on one foot.

Well, that's the end of my 'coaching' career.

Next, Gold Skater nearly took out a adult beginner  in the no man's land between our class zones when she did a (LOVELY!) Lutz. There was actual blade to leg contact. Mr. Badass and I had to suppress our laughter.
The Coach of the beginner class came over and said about her students, "They need to learn to look behind them when they skate backwards."  No one cared about the beginner. I sorta feel bad about that. Sorta.

Posted by Babbette Duboise at 10:17 PM No comments:

When you're in program, wearing the vest then
some skater skates into your blind side and falls over.

And she blames you.

Where Does Adult Group Freestyle Skate on the Ice

We've had an explosion of adult beginner skaters at the rink. I blame Yuri on Ice (we've actually had a skater show up in full cosplay costume). This is summer, and the tradition is that most people start skating in the winter, and summer group classes are small.

I came back after two weeks away and was told by Gold Skater how full the group classes were, and how the ice was full too.  Here's the layout for the beginner adults and the freestyle kids: 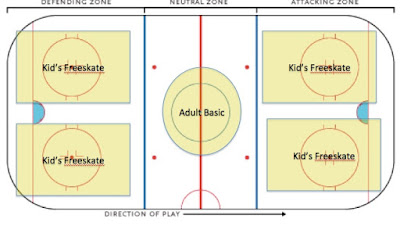 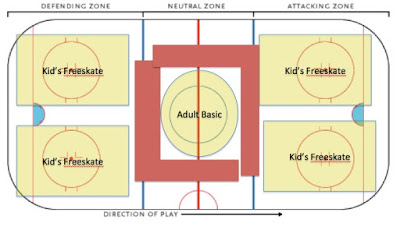 Are you thinking this?

I know, right?
Posted by Babbette Duboise at 8:49 PM 9 comments:

Settling Into A New ROH

So last week I asked my sharpener to take me down to 7/16.

He ran his thumb over my edges. "They still have plenty of wear left," he warned me. 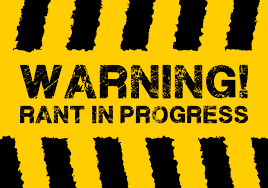 This reminds me of the time I called the roofing company when I needed to replace my roof on my fixer upper house. My roof with FOUR layers of shingles (two layers over code).  Let's just say, there was a period during a blizzard I trembled in fear that the roof would collapse.

"I need to replace my roof," I said to the salesman.

So apparently, people with a bad roof, in order to get the last penny of wear out of their roof--so they can go to their grave having not expended a nickel more than necessary in their lifetime--run the risk of major water damage to their trusses and ceilings.

These are the like the people that are miserable on their blades but refuse to get a new ROH or new boots because "they still have wear in them."

My sharpener and I have a little ritual. When he does a change to my blades, he drops my boots off at the rink. I pick them up and text him a report. On the 3rd or 4th text I wrote:

My sharpener replied: 7/16 is a popular cut. Maybe the most common.

I feel so ordinary now. No more kinky cut, just one that works for me.

So I picked up a couple of FO3 turn checking tips recently.

This one is for building leg strength and balance and is from one of my favorite online coaches, Isk8NYC, a coach who posts over on Skatingforums.com


"Practice doing back crossovers and holding the BI "cross" in the checked position - chest facing into the circle, shoulders over the curve, skating ankle/knee bent and free leg extended/pointed behind.  You can start doing it on a circle in one direction, then reverse to work the other side.  When that's less challenging, practice it as a serpentine pattern, alternating sides down the ice to fit in more lobes and develop faster checking skills."

This motivates me to hold the 'checked position' with extension. For mere crossovers, I just move along quickly, slowing it down and holding is a good exercise for the back glide.

The other tip is to 'look at the diamond'. I got this from my coach, Miss Bianca.  She uses it for teaching the flip. But for some reason she was using it with me and I realized it would make an excellent three turn check trick.

"Stick out your leading hand and look at the diamond," she said.

"What diamond?" I asked, looking around at her hand and her glove.

"The one on your wedding ring." She pulled her gloves off. Diamond rings on each hand.

We debate back and forth as to whether I'll ever get married at this point, but finally I stick out my hand stare where the non-existant should be and continued to stare at it as I did a FO3. I checked the turn. May I didn't do it perfectly, and trust me, it's a little disorienting to keep my eye on my hand, but possibilities there, possibilities.


Posted by Babbette Duboise at 8:33 PM No comments: