Do you use a skating frame when you skate?

Posted by Babbette Duboise at 4:16 PM No comments:

When the Rink Screws up my Skating Life


When I get a chance to review the new rink schedule

And there's too few hours for adult skaters to skate

But the rink converted the Friday afternoon public to Freestyle, so the adults like me who don't skate Freestyle but skate public regularly, lose our best practice ice.

Because of a variety of leg and foot issues, I just got on the ice today for a lesson. I mean my skating was smooth and solid, and my spins are faster. But... But.....

I now have to search the schedules of every rink in a 50 mile radius to find ice at a time suitable for adult skaters!!

Getting back on the Ice After an extended Absensce

How long does it take to get my feet back under me?

Posted by Babbette Duboise at 3:09 PM No comments:

I Tackle the Canasta Tango, Yet Again

So, while I was at Lake Placid, I took two lessons with Mark Fenczak, the dance coach. "I failed the Canasta Tango," I told him. "So long ago, I forgot all the steps."

"Oh, don't worry," he told me. "By the end of this lesson you'll have the steps completely down."

Okay, I failed the Canasta Tango because I FORGOT THE STEPS! I couldn't help but roll my eyes as I told him that.

He gave me a Cheshire Cat superior smile, because he was right, at the end of the lesson I had the steps down.


Once he pointed that out to me, I had the whole thing down in 15 minutes.  AND AS GOD IS MY WITNESS I WON'T FORGET IT AFTER MY TEST LIKE EVERYONE ELSE....probably not. 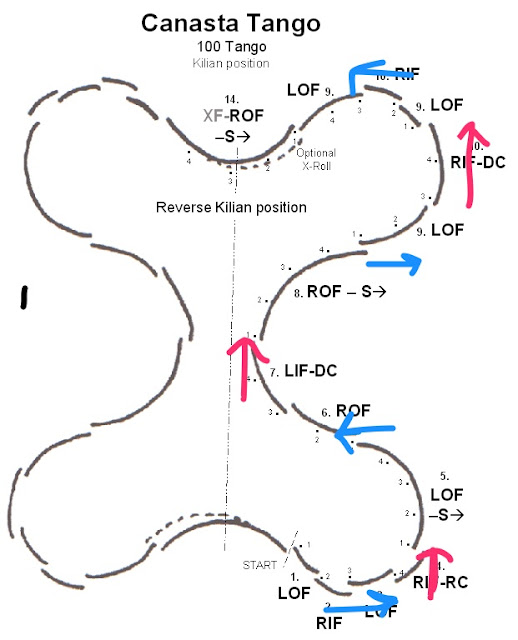 Of course, that was just the steps. I still had no power, and I'm sure a coach with more time that two lessons would have cracked the whip over my swingrolls and indifferent slide chasse's, but my cross rolls on the end pattern are not god-awful. Awful, maybe, but that's an entirely different issue.

After being off the ice for a few weeks due to my foot 'issue', I found that the first time I skated in Lake Placid I started getting calluses on both legs. Depending on your boot height these usually appear just appear a couple of inches above the ankle.This can hurt--a lot--I call it boot burn.

In case you've never had these before, or don't have a friend who is willing to show you theirs, I'll show you the one on my right leg. 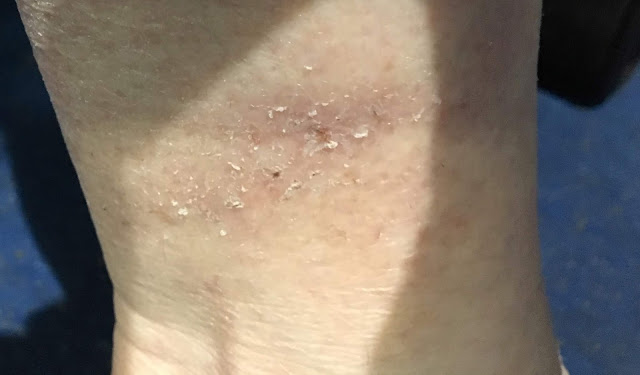 So, how do you protect yourself?

I use our friend the faithful gel ankle tube. (I popped across the street to the skating shop at Lake Placid and bought two gel ankle tubes for exactly the same price as I could get on Amazon! That was great!)

The first time I put the gel tube on for the boot burn, I let them rest directly on my skin. Apparently, I have sensitive skin, because it stung like a demon when I laced up my skates.

I unlaced my skates and put on a skating sock first and put the gel tube over the sock. 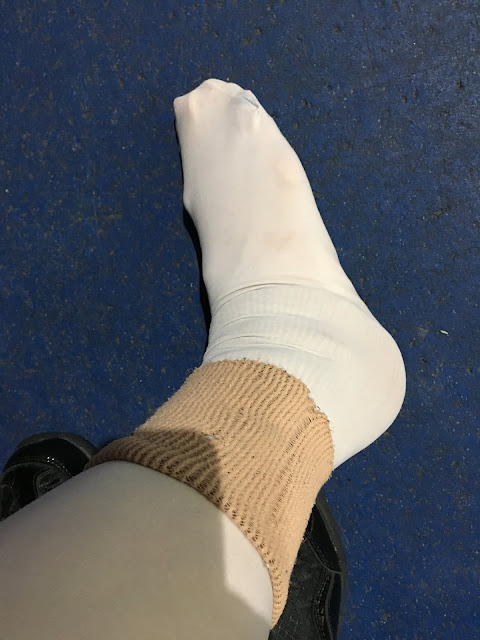 Over that, I put a thin knee high because I double sock.

That's how I skated every day since.  No pain at  all, but I am glad that Phil at Harlick's made sure I had extra wide boot tongues.

So, if you ever get boot burn, this is what worked for me.


Posted by Babbette Duboise at 7:02 PM No comments:

Posted by Babbette Duboise at 5:53 PM No comments:

Pad in the Hat to the Rescue!

Remember my Pad in the Hat? Where I stuff a skatingsafe kneepad into the back of my skating hat? Yeah, today, for the first time I had a chance to use it.

I was warming up before a lesson on freestyle when I tried to dodge a girl I was on a collision course with, caught a toepick, rolled over on my back, hit the back of my head, and then (horrors of horrors) a different teenage girl skating some backwards moves ran into my sprawling figure and flipped over me backwards.


It was just awful. 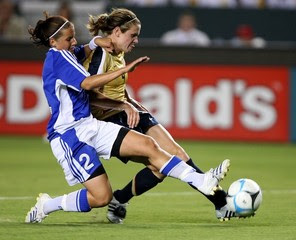 The new male coach was at my side immediately from all the way across the rink. I said "I had a pad in the hat," and he seemed relieved. Then my coach appeared along with every fascinated by an old lady fall tiny little skater to come and stare. I felt like a car crash on the side of the highway with the cops directing lookie-loo traffic around me.

The new male coach and my coach got me to my feet because to tell the truth, while my head didn't hurt at all, hitting my head had made me a bit dizzy. This probably had to do with the sloshing of the stuff in my ear canals, it can cause vertigo, but that only lasted a few seconds. The girl I had tripped apologized, and I gave her a short hug, "It was my fault. I tripped on a toepick. Are YOU okay?"

Then I turned to the good looking male coach, really he was getting better looking by the minute, "The President is Donald Trump, it's Saturday, I have a lesson, it's a little before 11." After that, the male coach and my coach patted me on the shoulder and I went to sit down.

When I finally got on the ice for my lesson,  I turned to my coach, "You know, I noticed that new coach got to me before you did. When you retire I want him for a coach."

My coach rolled her eyes. "You know the people who saw it said it was a slow motion fall. Just like you said you ARE a slow faller."