An Adult's First Session in Learn To Skate

What Happened to the Adult Skater in Their First LTS Session

When a ice tourist barges into center ice while my coach is yelling "More power!"

One of the male ice dancers wrinkled his nose as he took a seat next to the looker room door. "What's that smell?"

Since I have almost no sense of smell, I've missed the 'joys' of sitting next to the door to the locker room to put on my skates. I was 3 feet away and could smell nothing.

The male dancer actually got up and stuck his head in the door. He slammed it shut.  "It smells like there's a dead body in there!"

According to my coach, Miss Bianca, the hockey players think it's 'manly' not to clean their stuff for the entire season, and they don't even wash their socks. There's no reason for this as you can wash them at home.

Miss Bianca relates a story to the rest of us, that Dance Coach (who plays rec hockey) doesn't like this custom of our local hockey players. "Is dizguzting." she tells us he'd said, "I keep my gear clean. Someday when I see you in my hockey gear, you can smell me and see that I don't stink."

And we all mentally went...

Febreze grenade for the locker room, anyone? 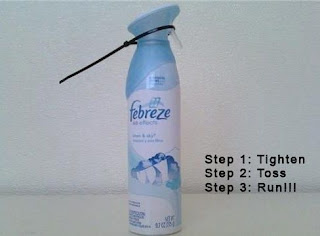 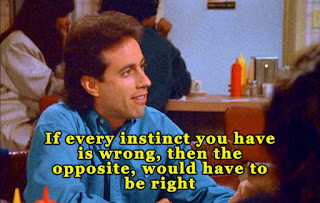 I'm a natural counter-clockwise spinner; But my spinning not going anywhere, because I can't lift my right foot up, and even two footed I can only get about 3 rotations.

So, for the last few sessions, I've been struggling alone with doing the opposite--spinning clockwise.  Do a clockwise spin and I'm turning on my right foot, I can lift that left foot up  immediately, but it feels wrong.
My clockwise spin is nothing to write home about: it's not centered, I can only get about 1 and a half rotations, and I wobble. Still, I'm doing it one footed. And once, I got lucky in the spin; going so fast and centered that I scared myself so bad, I had to grab the boards to stop. Then I clung to them, tilting my head left and right to clear up my dizziness.

I showed my coach, Miss Bianca, my work on my spin today, and we talked about it.  Miss Bianca said "It's not that you're a natural clockwise spinner, it's that you like to be on your right foot."  And that's the truth. When I spin counter-clockwise, I lean out of the circle because my body wants to be on the right foot.

So, today Miss Bianca started formally teaching me clockwise spins.  In the five minutes we devoted to it, I was spinning on one foot and exiting on a back edge. It's not a great spin, I precess, and I can't get up on the spin rocker, instead I'm too far back on the rocker. It's not a scratch spin and it's not a back spin. It's a 'whack' spin. I'll keep taking a whack at it until it comes together.

Another coach had told me I spun one way and jumped the other. I told Miss Bianca that, and showed her my waltz jump hop step through. It's a perfectly straightforward counter clockwise waltz step through.

"Have your tried to reverse the waltz jump?" she asked.

Yeah, cause left legs are lame-0.

The ice resurfacer, commonly called a 'zamboni', broke down at my rink yesterday. There was an alternating pattern of shiny,dull,shiny,dull,shiny ice at the beginning of public. 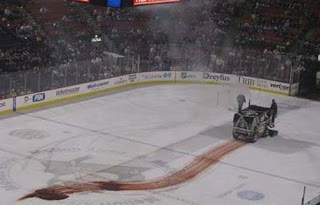 The day manager told us to go on the ice anyways, so we did.

Twenty minutes later the guard told use we needed to get off, so they could zam the ice.

We all get off the ice, and I'm standing a few feet away from the ice, thinking some elderly adult's thoughts about putting my Medicare sign-up date (1 May) in my calendar, when the zam driver appeared before me.

"Hi," he said, "The vertical auger broke and I just got it fixed."

I smiled up at him, "That's great you were able to fix it! Is that the part that pulls the snow up into the little box at the back?"

Then as he retreats down to the zam garage, I think, 'Wait, when did I get to be the captain of the ship getting damage control reports after a collision?' 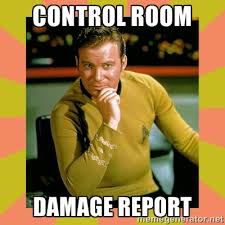 ODG, I skate too much.

When Your Coach Has an "Evil Plan"

For the last few weeks, my coach, Miss Bianca has been refining my mohawks in a pattern. Crossover, crossover, stroke, mohawk, turn forward.
So today I demonstrated that I can Nail It!

Miss Bianca nods, "Now, I want you to do mohawk straight from the crossover. So it's crossover, hold the inside edge, go directly into the mohawk."

This is a bit wonkier. I relied on that intermediary stroke between the crossover and the mohawk to get my upper body aligned; But after a few tries, it's ..... okay.
"That will do for now. Next we're going to do back edge of the mohawk, then go step behind, step over, turn forward. And we'll merge the two."

I give her a long slow stare. 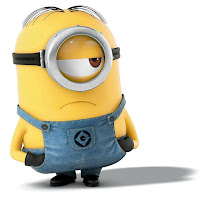 I now see her evil plan. All these weeks she's been planning to introduce me to the 8 step mohawk. No, not the one on Silver moves, the one at the end of Basic 8. Crossover, crossover, mohawk, cross behind going backwards, cross forward going backwards, turn forward, repeat. And strangely, there's only 6 steps in there, so why it's called '8 step', no idea. Maybe they count the tiny back stroke between the cross behind and cross forward, and an introductory step.

"So why did they add the step behind, step over going backwards?" I ask, "Was it to get people ready for back cross rolls?"

Then, I swear,  I see a twinkle in her eye. Miss Bianca has more Evil Plans, buried deep inside her Evil Plan!

My rink runs adult LTS like a social club. We've got Basic Skills and Freeskate. That's it. No Basic skills 1-8....just one Basic Skills class. Same with freeskate. Just one big class. Some people have been in their happy place for years. So yes, social club on ice.

I'm in the awkward stage -- too good for Basic and not quite really good enough for Freeskate.

Whatever. The skating director put me in freeskate so there I am.

We warm up with spirals on each leg across the rink. Let me assure you, my faithful readers, that I can indeed do something that resembles a spiral, if the spiral would accept an acute angle of the leg instead of a horizontal angle of the leg.

Then Dance Coach says, "Now we do double three entrance into a jump."


So, I go happily off to my space away from all the people who are willing to do whatever the coach says, and I work on whatever I want. Occasionally Dance Coach passes by me and says "Open your arms!" which is one of those coach instructions that skaters can't interpret because it doesn't mean 'spread your arms wider': it means something else that has to do with my shoulders or my elbows or my head position, but which no one can explain. Ladies and gentlemen consider that your lesson in enumeratio for the day.

On the other hand, at the end of class, I nailed the waltz jump followed by side toe hops. Not sayin' it was pretty, but damn, I nailed that sucker.

Still, crappy waltz jump with side toe hops, is better than nothing at all!

Me and My Coach Working on Back Threes

Posted by Babbette Duboise at 6:50 PM No comments:

Ever show up to a fancy party wearing the same dress as another woman? 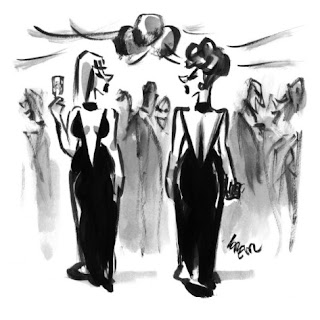 Well, after a time picking out unique color combinations that no one at the rink would mistake for theirs, look what happened to me today! 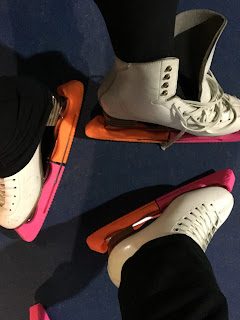 The Zipper from Heck.

Shortly before Thursday Group, I was trying to get my long jacket zipped up while I was talking to Gold Skater. Although the zipper looked fine,it wouldn't go up.

"Can you see what's wrong?" I asked Gold Skater.

So in about 5 seconds, the scene went from this:

We went back and forth a couple of times until she finally got the zipper  up and I was ensconced in bright yellow fleece like a  caterpillar ready for hibernation.

Gold Skater patted my arm and teased, "Now do you need Mommy's help to tighten your boots?"

Yes, I have my very own skating mom.

I don't think she'll pay my bills though!


Posted by Babbette Duboise at 10:14 AM No comments:

Skating Program Problems: How should I feel

When Trying to re-purpose an Old Costume

When Coach isn't Happy with the foot work sequence

So Coach Changes the Program at the Last Minute

When it Finally all Comes together 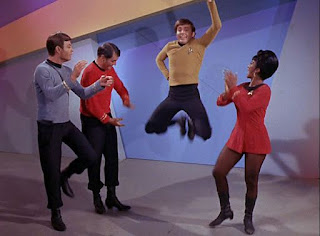 Posted by Babbette Duboise at 5:47 PM No comments: