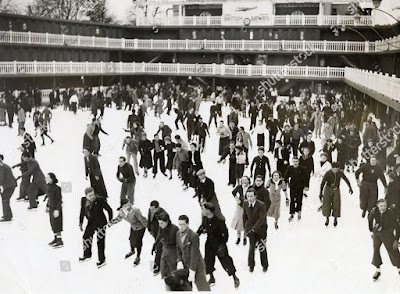 Posted by Babbette Duboise at 6:54 PM No comments:

Let's just say, I'm taking my own 'direction' in improving my spins.

My left hip bursitis can't stand much repetitive motion, and my right great toe has arthritis and can't stand repetitive practice either. I can't practice in one direction over and over, so I now alternate to take the load off.

Fortunately, when I practice spinning to the right, I've noticed that my spins to the left improve. This is based on some solid science: when you work on a skill or strength on one side it improves the weak skill and strength of the opposite side of the body. In my case, what's happening is the flaws in one side are improving due to the better skills on the other, so that my spins are averaging into mirror images of each other.

The two sides of my body working together

But OMG are my spins sLoW....
but I'm making progress and feel secure

So, a married couple I know approached me about helping them get ready to learn to skate.

I've already sent them a list of times of local LTS classes, with advice on schedules and publics for practice ice. It's their choice of course due to their location and personal schedules, but it's a good first start.

I'm trying to find a source of boots because my old tech has had a shop issue due to a lease problem. I'm still trying to get hold of him.

I'm making a list of skating protection and head protection, encouraging them to get gel ankle sleeves, wrist guards and Katstrapz and the half dozen things you want to have in your bag.  Have them handy because you will.need.them. And the Mrs is going to get my old Ice Halo.

Oooh, and they'll need skate bags. But, I won't give advice on that. Bags are way too personal and I'm sure they already have sport bags and it's way too early for Zuca's.

But FINALLY I will have someone to unload all my extra gloves on!!


Let me go open the glove cabinet to get them out!

Posted by Babbette Duboise at 10:57 AM No comments:

Passing footwork in LTS USA: I never have to do that again!

I told my coach that I had passed "Crossover, crossover, mowhawk,step behind, back cross, step forward into the circle" and "As GOD IS MY WITNESS..(you may remember this from last week)...


I never have to do that again!

My coach raised up one finger. I know that look in her eye. I KNOW THAT LOOK! She was going to tell me to demo it. I JUST KNEW!

I raised my hand up to stop her directions. "No," I said, "I'm not doing it . No, never ever. It is done, dead, gone behind me, passed away, raised up to heaven, lying checked on St Peter's checklist of stuff I have passed in LTS USA. Buried under the center circle not to be resurrected  until you and I are in lead coffins in Veteran's Cemetaries someplace. That kind of dead. Fini."

Posted by Babbette Duboise at 9:02 PM No comments:

I was doing a forward edge pull--as a coach once told me it's 'the dangerous one'--and fell on my lower back and the back of my head.

Fortunately, I had my head protection on, my pad in the hat, and while the blow did sting, and I was just laying there thinking about how nice and relaxing it was resting on the ice, when all the men appeared (3 of them) . At that point, even though I was thinking I should get up, once there was all those men I had to then them help me up and fuss. I rattle off the president, the time, my name, my coaches name and how much my lesson cost. My retinas were also the same size. So I was good.

The part about this I want to mention is that when a person hits the back of their head, there is a second blow. The hit at the back slams the brain forward in the skull to the inside of the skull in the front. This is called contrecoup.

So, even though I had head protection, I decided to sit it out for a half hour just in case there was a contrecoup. My head didn't ring, and I wasn't going fast, so when my lesson  I got back on the ice. I didn't have any problems with it over the next few days. No headache, nothing. I got lucky.

However, I landed on my pelvic iliac crest and seem to have bruised the bone. That's been a pain in the butt for weeks! Physical therapy, pain killers, heat. What did I learn?

Sometimes, it's not the head, it's the Butt! 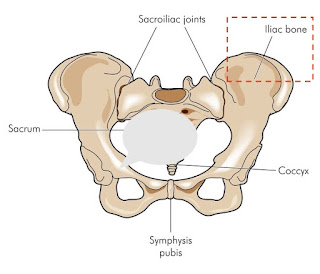 Posted by Babbette Duboise at 3:54 PM No comments:

How the adults see the kids

How the kids see the adults

Posted by Babbette Duboise at 7:08 PM No comments:

As I was taking off my boots, I heard the dread clink of
of my blade stepping on on something metal

WHO IN GOD'S NAME MAKES BENCHES OUT OF ANGLE IRONS IN A ICE RINK!! 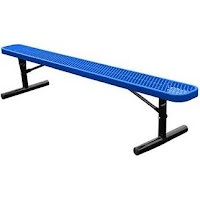 How do you get black marks off your tan or white boots?  Or even if you have them, custom boots of custom colors? 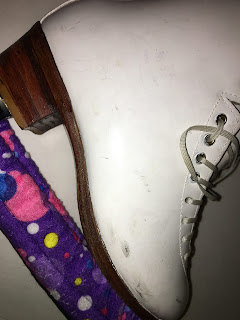 I don't know how you tackle this, but this is what I use.
A Magic Eraser! 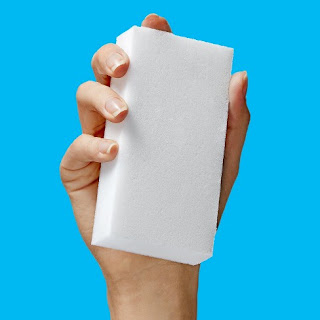 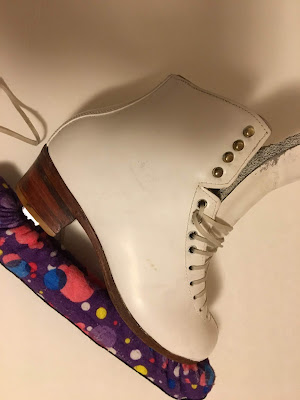 And easy enough that you can do it every time you skate!
Posted by Babbette Duboise at 5:31 PM 2 comments: