You perhaps know that the New Yorker magazine has almost a hundred years of cartoons and beautifully illustrated covers. Some of these are about figure skating. I am now going to critique the skating in some of these cartoons. 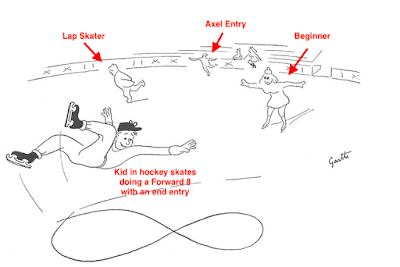 The background skaters are nicely drawn, and you can instantly see what the skater is doing, and their skating level. This is obviously a public skate session.

The problem is with the 'humorous character'  in the front.  He's not funny at all--except his entry to the figure 8 is completely wrong.  Falling is so common in figure skating that it's not fodder for humor. I think this must have been an illustration for a short story or a drawing to fill a blank space.

I do want to mention that every cartoonist in the New Yorker collection draws the figure 8 entry from the end--as if it was being drawn with a pen. What's with that?

Chon Day, 1944
Here's another example of an 'end on figure 8 entry'
And shouldn't his free leg be tucked in? 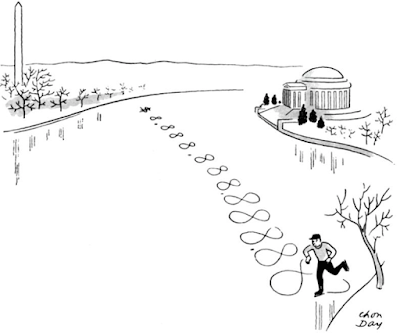 Here's my caption:
To pass Gold moves, USFSA requires you to to skate
how much you paid in lessons
rounded up to the nearest 8

The Broken Blade at my Rink

Below I'm showing the effect of a broken blade. Johnathon Hunt in the 1999 South Atlantic Regionals, had a blade break in a triple Lutz.

He was in good position during the jump, too bad.
And he cleaned up the parts and screws on the ice.
That's a gentleman.

Now at my rink last week a male skater had a blade break, not in quite the same way.

He had Pattern 99, because he's a big guy, and much like Santa Claus, he needed that fist sized toepick that a Pattern 99 gives.

He's walking to the ice, and he hears a click-click with every right foot step.

He gets on the ice to take a lesson.

He's not jumping, so the lesson goes okay.

He gets off the ice and takes off his boots.

The right blade had a crack straight across the front footplate, so everytime he took a step, it made a click-click.

Then the skater contacts his coach, who contacts her skate tech, that has a lot of male customers, including several Olympians.  The tech has a pair of Jackson's Ultima Apex in 11 1/2" on the shelf and they're equivalent to the Pattern 99. The tech gets the word the skater will take them. They're mailed out two days later.

Let's face it. In figure skating, who you know counts, even when you're a hobbyist  or recreational skater.

(Oh, and why did the Pattern 99 break? There's a suspicion that it was a manufacturing fault, as skates normally rust out at the stanchions (as in the video above))

Posted by Babbette Duboise at 2:13 PM No comments:

It's Christmas and the Ice Tourists are here en masse. This week and next week are the two most miserable public skates of the year. At my rink, Christmas Ice are the only two publics where they do mid session ice cuts.  So, the ice is crap after the first 10 minutes, and crowds double after the ice cut.

The kid who can't skate
is like the cat in the soccer pitch:
everything stops until you get them
out of the circle

And adults who can't skate then get in
the circle,  ignore my evil eye.

My coach to entitled mom with kid in the circle: "Please take your child out of the circle."
Entitled Mom: "But it's safe from the crowds."
My Coach: "IT'S NOT SAFE IN HERE!'
Mom: You can't tell me what to do.
My Coach: I'm a coach (points to big words on jacket) YES I CAN.

But hey, I got to work on 1 foot inside and outside rockers and counters. New stuff
Coach: "Do inside counter, back cross, then spin."
Me: "Ok"    [spin sucks]  "You learn something new, something old goes bad."


Posted by Babbette Duboise at 8:52 AM No comments:

I SKATE TOO MUCH: Holiday Version

I get this card for Christmas 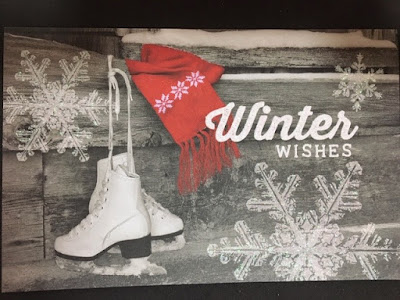 I thought, "What brand is this?" before I even opened it!

Any Ideas?
Posted by Babbette Duboise at 10:22 AM No comments:

(I haven't been posting due to a family issue. Please have fun reading my ChRistmas Post from 2018)


Santa is SHOCKED! Shocked! I tell you!
So, when you see Santa in gifs, and mp4's and even jpgs where he's skating, you may be wondering what boots and  blades Santa uses.

First off, I have some semi-inside  information. My skating friend Jim, weighs 230Lb. We can use him as an analog for Santa. Jim had most of his singles: just no lutz and no axel. Cut him some slack willya. Jim skated in the Jackson Premieres and went through two pair a year.  Now JAckson has stiffer boots: Premier is a 69 on Jackson's stiffness meter, and the Supreme is stiffness 95.  Now at 20 lb heavier than Jim, Santa could certainly go up to the stiff Supreme. However, as we all know really stiff boots are a bitch to break in. It's not unusual for a man who jumps a lot to go through a couple of pair a of lower stiffness boots a year since it saves wear and tear on the ankle and knee. Also, the Supreme (stiffness 95) is intended for quad jumps. The guys that are doing those are probably going through two or three pair a year anyway.  Given a reasonable measure of income for Santa, he can afford to buy two to three pair a year. And since Santa probably cannot do quads without using his magical powers (there's no cheating in figure skating) he doesn't need top of the line stiffness 95 boots.

But since Santa weighs 20 pounds over Jim, he will need a stiffer boot than the Premier. Next up in the Jackson line is the Elite at stiffness level 85. This seems a reasonable solution. Multiple pair a year, middle of the road stiffness, and possibly a custom build.

I would bet that SANTA will need a custom build since with all the tramping around on rooftops, he no doubt has extra wide feet to give him traction. Secondly, I would recommend  double loop scallops at the ankle since that will help him with the break in every six months. I know, I know, double loop scallops are a 'dance thing', but honestly, Santa is still working on getting some doubles, so it's not going to kill him to have a flexible ankle

What Brand of Skate?
Santa has been skating a long time. He was born in 373 CE, and took up skating sometime in the 17th Century. He's gone through a lot of boots. In the last century, Santa had a strong preference for Oberhammers, but once his last pair died, he had to enter into a search for new custom boots. As we all know, finding a new boot maker is traumatic when your favorite one closes down.He skated in Klingbeil for many years (going in disguise to sit in the big chair for his fitting), then he went to all the manfacturers to get a sample of a custom boot for testing. He's now settled on a final maker, but I'm not allowed to reveal it. However, if you look at some of the pictures of Santa skating, you will see he likes a big rounded toe. Perhaps you can guess.

What Brand of Blade?
Santa likes the Pattern 99. Santa needs a toerake the size of his fist for his toe jumps. He has to propel 250lb into the air, and good form can take you only so far, eventually you need force. The only blade that gives him that power is the 99, although he is tempted by the Gold Seal

What is Santa's Skating Discipline
You'd think it would be men's singles, but Santa likes the ladies. He also does pairs and ice dance. Mrs Claus is quite an active skater, and is also the President of the North Pole Skating Association (an ISU non-voting member). Mrs Claus and Santa ice dance together, although Santa does pairs with Amy the Elf in order to get the size advantage for the throw jumps.

Santa is also VERY fond of figures since he regards it as off-season training for landing on rooftops. Landing  8 reindeer and a sleigh on a modern suburban house requires year round focus on good edges and precision turns in an unforgiving pattern. Santa once considered deploying a mobile air traffic control team with the light up wands and stuff, but in the end decided to use VFR rules--Visible Flying Rudolf rules.

Santa is  competing in the World Figures Sports Skating Holiday Dec 30, in Lake Placid. Keep your eyes open in the Men's competition for the guy in the red hat. That will be him.