What I'll Settle for

I Considered this. But scary.

Things that only Figure Skaters Understand #6

Posted by Babbette Duboise at 7:38 PM No comments:

It's All About Spinning Faster

When my Coach sees me spinning faster
Then when my coach wants me to spin faster...again

Then about 30 attempts to get really fast spins later

"Worst day ever."
Posted by Babbette Duboise at 9:40 PM No comments:

Labor Day weekend, the horde of ice tourists showed up right at the beginning of Public. In the summer, they don't show up until an hour after public starts, but since Labor Day they've been clustering at the ticket desk 15 minutes before the hockey game is over. I just stick my hand in the air as I pass behind the crowd and wave my Club Pass. The day manager motions me on, so I don't have to stand in line.

I mean, what is it? Is there a rule like no white shoes after Labor Day? "No ice skating until after Labor Day." Then magically every parent and their slack jawed pre-teen hockey boys who thinks it's okay to skate directly at old people and dust them with ice from a hockey stop appears on the ice, right after Public starts.

Well, it's not like the Good Ol' Days was much better. Back in the 19th century when skaters went out on pond ice, it was uncontrolled, there were no rink guards, and you could always depend on at least one person a year drowning. So count your blessings.
Well, now I've got that out of my system... 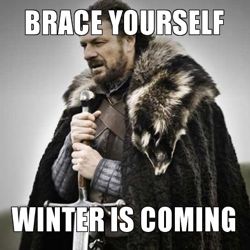 Posted by Babbette Duboise at 8:09 PM No comments:

Yesterday I got a perfect two rotation one foot spin. Solidly centered. With Speed.

Then I exited the spin in a lovely back edge.

"You got going at a decent speed, with great position then you panicked at the speed, didn't you?" Coach Bianca said.

I hung my head in shame,

For about two seconds!

"One day you'll do them and then you'll wonder why they seemed so hard." Coach said. And to tell the truth they are not only getting easier, but I'm not afraid of falling anymore. And the fact that I no longer wear my glasses when I spin so I can't actually 'fixate' on what I see has made a significant difference.

We kept working on the spin, and then I got overconfident and lifted the free foot too soon. To save the spin, I immediately went into a Spiderman.

I've never mentioned this before, have I? A Spiderman is when I'm on an inside edge with the free leg bent either back or sometimes stuck forward, and my arms are posed as if I'm about leap on a miscreant. Extra style points if the skating leg is bent too. 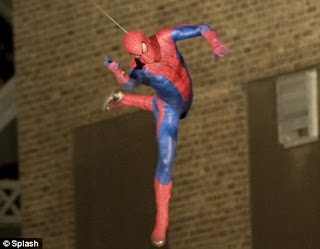 Anyway,  I stayed in the spin, got upright and did a traditional exit to the free leg in a landing glide.

It didn't occur to me until I was driving home if I straightened out that leg and fixed my arm position, I could have a Camel spin!....In my dreams!

Posted by Babbette Duboise at 9:07 PM No comments:

Why is it called that? Three turns, Mohawks, and Choctaws

We all know this, right? It's because when you skate a three turn, it looks like a figure three drawn on the ice. 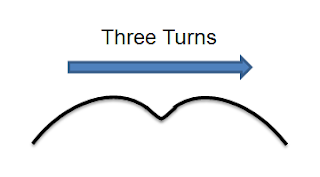 However, not everyone does know this. When a coach said in a group class "We call it a three turn because it draws the pattern on the ice of a 3." a woman next to me gasped. We all instantly knew she'd just had a revelation. I said "Don't be surprised when you get to figure 8's."

So one reason things get their name is because of the shape the skate draws on the ice.

In the "History of Figure Skating" it says the names of the mohawk and choctaw to skating steps came when London skaters watching Mohawk and Choctaw dancers in a local theater observed that some of the dances or steps reminded them of skating steps.

I researched Google Books and looked at skating books from 1869 forward. In the 1869 book--no mention of mohawk or choctaw. By the 1880's mohawks and choctaws were mentioned. So those names were put on the skating moves sometime in the 1870s. (I've actually seen a book where the man who named them is named, sadly I can no longer find it).

Well, I'm going to do some speculation and see if I can make a reasonable guess of what dances or steps the skaters of the 1870's may have seen by looking at videos of Mohawk and Choctaw dances on youTube.

Choctaw
First, the skating choctaws of the 1870's were big, sweepy moves skated on pond ice. They may have resembled a choctaw as demonstrated by Maya Usova. It's a large serpentine move.

I couldn't find a step like that, but I could find a traditional Choctaw dance that had a serpentine shape so perhaps this dance form inspired the name of the choctaw step.

Mohawks
Everyone learns a mohawk early on in their skating life so we all know what it looks like. There's a shift from one foot to the other, and a shift from forward moving to back motion.

In this demo we see a skating mohawk. I coudn't find an exact match to that. But there  are  lots of mohawk 'tricks' including mohawk barrel rolls (thank you Coach Bianca for your mohawk obsession).

So let's look at a mohawk barrel roll (sorry about the hockey skates).

And now we're getting somewhere. I can't match the big sweepy mohawk, but a step like a mohawk barrel roll does appear in several Mohawk dances.

Below follow the dancer in the large white head dress to see the use of the step that reminds me of a skating mohawk barrel roll.

So there's your figure skating history speculation for the day!

Posted by Babbette Duboise at 7:04 AM No comments:

Adventures in Recreational Figure Skating : You and Your Music

Trying to figure out the rink's music system the first time 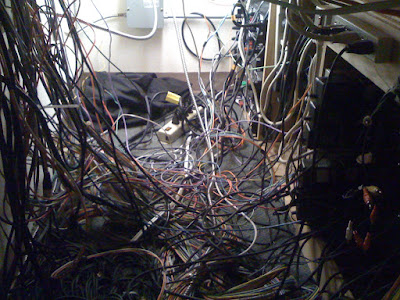 What your music sounds like when you
play it through headphones

What your music sounds like on the rink speakers

I took a lesson from a guest coach at Lake Placid and after watching me she recommended that I try skating without my glasses.

I wear tri-focals (Hello, old age and death) and the coach told me that they caused me to unconsciously hold my head in an awkward position. Now I know that  looking down at the ice has the power to pull you off-balance, so I was willing to give it a try.

Did I have a miraculous fix to my skating? Hard to tell. My stroking did improve, and my head position and posture got better and some of my skills I have difficulty with did get incrementally better. But was it, "Take off your glasses and you get an axel?" No.

Is it worth a try? Well, if you're not Velma in Scooby-doo and you have a reasonable degree of vision, I'd say yes. You certainly don't want to skate in a competion with glasses on, so why not train without them?

The only problem was that I now have to keep my glasses, a pen, and my skating card in my bra. It's a little crowded in there when I need something.