Over the Tops: Skating Sox Mated With Boot Covers

While I was at Lake Placid I came across a coach wearing some thing that looked like a half-boot cover that pulled over the laces and down the heel. Since I am obsessed about having my laces covered (I fold my socks down over them) I asked if she'd made them herself or if they were something new.

Well, new they are. They're called Over the Tops and they combined a sock attached to a boot cover.


I Bought the Black Waterproof ones 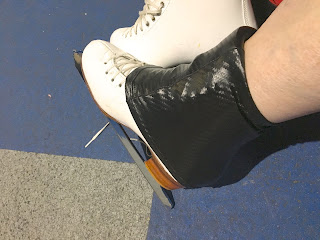 When you open the package, you'll find the sock part has a curved toe and a seam that fits along the arch side of the foot but faces outside (away from the foot). Pull the sock up until it's firm around the foot and leg. Make sure the seam does not slide underneath the big toe.

Because the seam is only on one side of the sock, the socks are sided. There's a left one and a right one.


I know you're thinking the sock seam might hurt when you skate, but this doesn't happen. Once you adjust it properly, the seam of the sock apparently just flattens into the tiny space between the insole and the boot upper. I can't feel it at all.  It also has a nice rounded toe unlike Mondor and the fabric is stretchy.


When you put the sock on (with the seam facing out), pull the cover up over your shin and put on your boots. The pattern of the cover will be facing your skin. 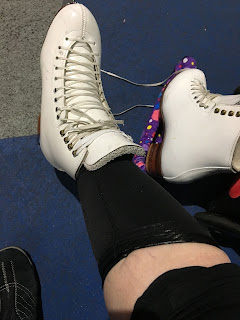 When you pull the socks up, make sure they come to the top of the boot before you fold it over. In the picture below, you can see the fabric of the sock reaches to the top of the tongue, and then I fold the cover (the shiny part) over the skate. Once you fold the boot top over, the cover is facing outside the boot. All you have to do is fold it over and tug it back down the heel and forward over the laces. 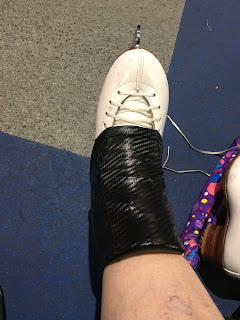 That's all there is to it. I found it took me a couple of tries to tweak the seam and get the right amount of tug to get it to fit. The waterproof fabric is stiffer than the other fabric models and requires more tugging.

Over the Tops come in a variety of fabrics for the covers and patterns. I'm rooting for white tops in the future. The black ones are nice with my black tights and give an appearance of those fancy, expensive over the boot tights, when I'm really wearing $10 tights from Target.

Here are some other fabric patterns: 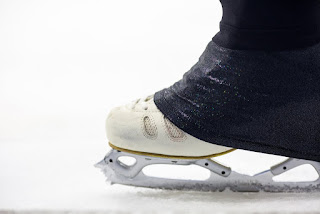 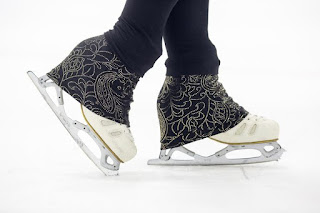 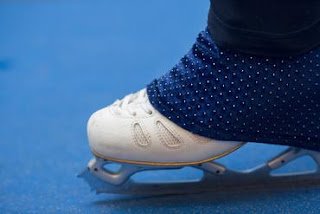 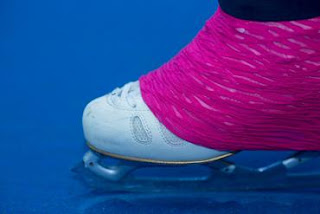 The two things that make Over The Tops special are the new sock design and the attached boot cover. This is not just a sock with a cover. This is a new design for a sock, with an attached cover.

The sock, which is of a unique design that curves around the foot, rather than have a square end like Mondor. The fabric is very nice. I can't say enough about the quality of the fabric of the sock. It's not like any sock I've ever used before.   I don't know the denier, but it has a wonderful feel and stretches beautifully. It also has just the right finish to keep my foot from sliding in the boot, and keeps my feet warm and dry. I love the socks.

Secondly, the fold over cover keeps the laces tucked away in addition to presenting a bit of flash to go with your skating. I've spent years with my knee highs folded over my laces and while that' does the job, it's not pretty.  These covers are pretty.

I wish they had white covers available. But that's just a personal call.

Each pair is $40, and there are 14 patterned covers available.  I know this seems a bit steep, but did I mention how much I love the socks? And how nice it is to have a patterned cover to protect your boots and add a bit a warmth?


Posted by Babbette Duboise at 3:45 PM