Skating with your Dream Coach

Okay, I love the way my coach, Miss Bianca, teaches. She holds me to high standards, doesn't let me get away with whining, and my skating has really improved.
But really, in your fantasies, doesn't everyone have a dream coach or coaches?  I mean, you know you'll never meet them, but isn't it just fun to make a list?

My lesson?  Blade Sharpening! Apparently when he competed he did his own blades and had a lot of 'little techniques'. I love the engineering side of skating. That could be fun!

Dan Hollander Dan isn't famous for his amateur career, but for his career as a professional comic skater. And as additional positive, he appears to be knowledgeable about ISI!

Frank Carroll  Probably one of the greatest coaches in the world. His list of elite competitors is long and distinguished. His most recent star is Evan Lysacek. And though Frank stopped competing in the 60's I have video of him in Ice Follies.

I know what you're thinking. What can a low level beginner skater learn from Frank Carroll? Well, in the Manleywoman Skatecast interview with Frank Carroll, he said:


" I have some of the most dreadful skaters the world has ever seen,..." 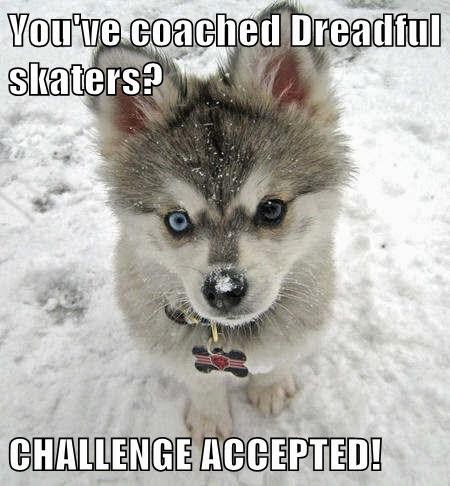 Posted by Babbette Duboise at 7:57 PM