Technically they're called 'skating aids', those usually metal frames that are rented to families with little kids to push around on public ice.

First off, they hold up the kid and the kid having no sense goes as fast as he can. Can he stop? No. Does he care that he's in center ice? No. Do kids leave the frames on the ice next to the gate? Yes. Do teenagers get hold of them and fight 'ice wars' with them? Yes.

My worst experience. A kid picked one up at threw it at my head. It wasn't personal. He wanted to throw something, I happened to be in the way. I gave him the rough edge of my tongue.

Still, using a skating aid has a long, long history. The earliest pictures I've seen use a chair. This makes sense. Cheap stable, and on outdoor ice it gives you something to sit on after you get off the ice.
Interestingly, in China there's a long history of outdoor chair skating. It's evolved into some elaborate equipment. I think you push yourself along with the sticks. 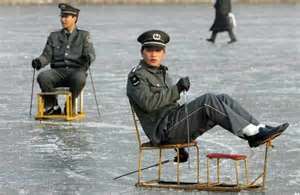 But people came up with other designs.
But there's many, many patented designs for frames around the world.

But there are skating frames that defy rationality.
But just when you think it couldn't get any worse, someone comes up with the ultimate skating frame. A two seater.
So, take heart, whatever frames are on ice at your rink, it could be worse!

Posted by Babbette Duboise at 8:21 PM