I'm going to propose something that I've never seen discussed: Figure skating owes a big hug and a kiss to hockey.

Figure skaters compete individually, or part of a pair, or maybe part of a synchro team, but in the end most of us spend our skating life practicing alone....just sharing the ice.

I know the elites may have private ice but I'm writing about everybody else.

Even though we share the ice with each other, we usually don't have the power--even with a big figure skating club---to get priority for ice time.

What would figure skating do without hockey? 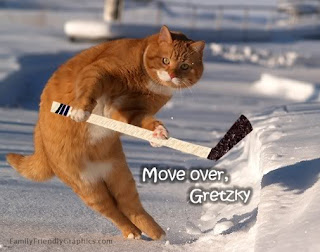 Hockey is really organized. When my old rink closed, the hockey organization went out  got someone to donate a bankrupt commercial facility and the hockey club built a new rink inside the building.

That's right, a hockey club built a rink and transferred the entire league to another town. I've been there. The facility may be a dump, but the ice is nice, and they're making money. People have tailgaters in the parking lot on weekends. It's an effective, useful rink with a small figure skating community.

What did the figure skaters from my old rink do? They slunk away to rinks around the area.

The figure skating club was much beloved (we even had a reunion) but for some reason figure skaters just don't  seem to think in the 'community spirit' way hockey organizations do.  We act as individuals, not a big league with lots of money.

So, here's to hockey! Thank you for keeping the rinks open!

Posted by Babbette Duboise at 8:05 PM