Silence of the Coach 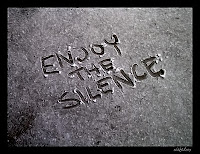 There were long periods today when Dance Coach just stood there staring at my skating.  Silence absorbed him, descending around us like fog on a snowy day.
That was really annoying. I missed the yapping.
He likes to have me start a lesson with fast crossovers around the circle. It's not a bad routine: speed, edges, posture, kneebend. The third time around the circle in silence I skidded to a stop, "What? What?"
He pulled his lower lip and sighed. "Not bad." Then, "But, get your free leg higher, and hold the stroke longer."  A few crossovers later there was another sad sigh. "Not bad."
This is so typical of coaches. Silence is the sign I'm not  doing anything wrong--for my level.  I don't think it's a sign I'm doing everything right.  I'm just now getting the 'hold leg up higher' comment. Obviously that was always a problem, but I wasn't at the level where I could do it without falling forward on my face. Now I am. So, I'm getting 'tweaks', not 'remakes'.

We progress on to other elements in the Canasta Tango. No comments about 'hinching' (Dance Coach's made up word to cover 'hinging' and 'hunching'), no sharp cracks about "Control, control!", no throwing up of the hands in horror.

Then I caught a toepick and took a shaky stroke that had a lot of unrestrained wobble but I stayed upright. He was across the rink and swore in Russian. I whirled toward him, shaking my finger at him, "That better not be anything bad!"

For Dance Coach this is amusing. I must remind him of his grandmother telling him off back in Russia. He laughs, "Nothing bad, really."

I wish I could say the whole lesson was a burst of unrestrained joy at the improvement in my skating skills, but after minute 30 I hit the wall. I actually nearly took Dance Coach down while we were doing the two footed swivel step in hold from the  Cha-cha.  I started the wrong direction and my left blade hit his right one. Then there's the usual trouble with my left forward inside swingroll in hold. I can do a fast curve, or a tight curve. I can't do a  fast, tight curve. That thing scares me blind.

Relearned the Rhythm Blues, which I haven't done in a long time. The step behinds were as sweet as ever. The side pattern with the lilt and the hold is going to be my bugbear.

Then Dance Coach played music for me to select a song for the Canasta Tango. I listened to the second one. "That one, Hernando's Hideaway!"

Watch it all the way through. A great Broadway showtune.

Posted by Babbette Duboise at 5:39 PM