When I asked Dance Coach to teach me progressives he shook his head politely and said, "You're not ready."

Okay. Not ready for the axel? Sure. But progressives? They're just a slidey kind of crossover and he actually called two of my crossovers (out of thousands) "Beautiful."

A couple of weeks ago Coach Cruella introduced progressives into the edge class. I know what you're thinking. It's a Cruella vs Dance Coach Smack Down! 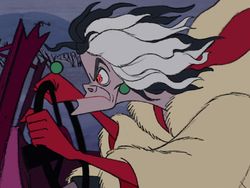 And in the right corner, we have Coach Cruella. Leader in teaching adults edges and jumps, developmental skating skills, and breaking bad skating habits.


And in the Middle Corner we have your hostess. Wringer of hands, faller on butts. Scaredy cat of the Ages. The ICE DOESN'T CARE BLOGMISTRESS!

Coach Cruella has an interesting way to introduce progressives. The student does a two foot grapevine and then bends the forward knee, while the under leg pushes out. So both feet on the ice, the right foot passes in front of and past the left foot, bend the right knee and straighten the left leg so that you get an under push. Bring the left foot out from under, and do the exercise in the opposite direction.

Except it's not happening with me. I can do the weight switch, but the timing is off. And the under push is not a push, so much as it's an under leg.

And the winner is?

Coach Cruella's technique works with the other student who has progressives in 15 minutes. She also has knees 30 years younger than mine. That's my story. Anyway, even with practice I can't get the under push. Apparently, for some reason I'm leaning out of the circle. I also did this when I was learning crossovers, so there's some bad habit in there too.

Sad face. Well, it's another skill to practice and another life challenge to overcome.
Posted by Babbette Duboise at 3:21 PM