The Student Who Shows Up Late 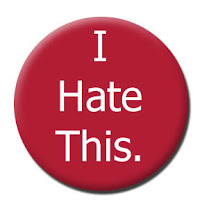 He's only able to do this because the rink allows bridging of freestyle sessions. If bridging wasn't allowed, he'd have to cut either the boy or the girl's lesson, because mine starts in the next freestyle session.

Other coaches I know of,  tell the late skater they'll only get a partial lesson, or they move a student already on the ice into the late student's session and the late student either waits around or loses a lesson.  None of these are my coaches. My coaches have all put me and my schedule at the bottom of the priority list when it comes to a late skater ahead of me.

If there's someone who has to move a lesson, or lose time. Guess who it is? The adult student. Every coach I've had who's had 'laters' always moves my lesson around willy-nilly because the kid students have some precious schedule to keep to. Maybe it happens to other kid students too, but it makes me grind my teeth when it happens to me.

I can say this: I remain flexible to my coaches' needs, but I hate being the one who always has to shift around.  Also, I think giving priority to the late student is sending the wrong message to the parents.  I don't know if coaches are afraid the parents will stomp off and find another coach, but this is another one of those things that need to be laid out when taking on a student.

So if by chance you are a skater parent, let me give you some advice: the lesson start time is when your child is supposed to be on the ice. It's not the time you show up. It's not the time you start putting the boots on. And if your precious is a little hockey boy, don't show up at the rink and start dressing him at lesson start time.  You have to show up, pay your freestyle fee, give the card to the monitor, and get the kid dressed and booted up. Show up a half hour early. Your kid must be stepping on the ice at lesson time.

You don't do that, there will be a short, elderly woman skater with an evil glare staring at you.

Posted by Babbette Duboise at 9:11 PM

Email ThisBlogThis!Share to TwitterShare to FacebookShare to Pinterest
Labels: laters