Deliberate Practice and the Weak Side

The other night at edge group Coach Cruella asked the two of us who had shown up for class: "What do you want to start on tonight?"

"My three turns suck." I did one. They don't actually suck. I have a nice turn with a pretty point but because of my short exit edge they quickly turn into drop threes.

The other student's eyes popped open. "What's that?"

I have to cut her some slack; She was in hockey skates and apparently is still in learn to play. So, I thought quick about something she and I both do. "What about back crossovers?"

CCW for both of us. "So start there." She said. 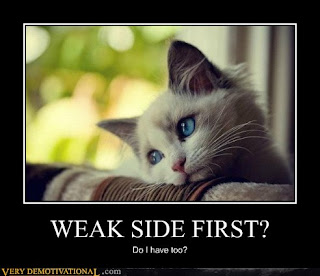 So, upholding the banner of deliberate practice, I did weak side first. And I did it again today at practice. I'm getting more comfortable on the weak side, I can hold the body and arm position Coach Cruella wants, but I can't crossover on the weak side (yet). The good side? The back crosses are adequate. God knows what Dance Coach will say. He keeps saying  "You're not ready for back crosses." He still has me doing back step overs because of my weak back edge. I guess I'll find out Saturday what he thinks!
Is deliberate practice working? Well, too early to tell. But I was able to practice all my backwards stuff first (weak side first) before I got to my fun stuff. Slowly conquering my skating phobias. What's next? Back 3s?
Posted by Babbette Duboise at 10:32 PM