If you've been following my adventures in Adult Freeskate, you'll know that we don't skate 'Levels'. There's no Pre-Free, or Freeskate 1-6. There's warm up skills (which we do as a group to the best of our individual ability), followed by 15 minutes of personal skills we're working on. I've got much better because of this--and I've thanked my skating director for kicking my ass out of Basic into Freeskate.

But this new coach is new to the rink. He's a retired National Competitor. It's his first time running  our Adult Group.

He flips open the chart the skating Director gave him. It says Babbette Duboise "FREESKATE 2". "That's just a placeholder," I say. And he completely ignores that.


He start rattling off the the Freeskate 2 skills.
Him: "Alternating forward outside and inside spirals on a continuous axis ?"
Me: "Yeah, sure, I'm good."
Him: "Basic backward outside and backward inside consecutive edges?"
Me: "Small but steady"
Him (quick like a fox on a chicken): "Why small?"
Me: "Power."
Him: "Backward inside three-turns?"
Me: "I'm working back outside 3's"
Him: "Where are you in your back spin?"
Me:

So I guess that's pretty much a "don't have it" answer.

Anyway, this turn of events strangely puts Mr. Badass and I in the same level. He's a 100 times better than I and working on his lutz, but he's gracious enough to say "I need to work on my back 3's" when the coach assigns us to do them.  And he's on record that his back spin skill is "Sorta", so I don't feel too bad.

The coach had me practice my two foot back 3's. And my spins. Then when he wasn't looking I did some back outside edges, just to check how bad I was. And wouldn't you know it,  during what was supposed to be a step forward, THIS happened...
One. Just one.

These are going to be like my FI3--lifetime total: 11.

And the next day, I mentioned it to my coach in a scheduling email. 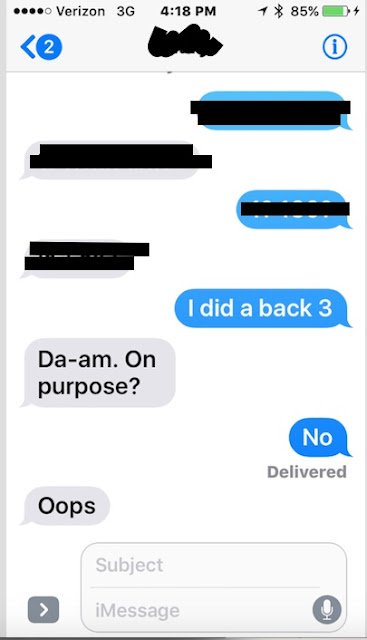