Learn to Skate: Lanes Vs Circles

In Learn to Skate programs, you have a butt load of marginally skilled skaters skittering in fear across the ice. In pursuit of safety, there is a need to keep the groups separate (So, 'no crashing!'), Also, the training space needs to be arranged so the coach can keep can keep an ey on everyone in the class.

First off, 'there are no rules' of how to lay down the lanes. I won't even say this laydown is 'typical'. Remember I've only seen adult LTS. However, Basic 1 seems to get a whole lane to its self because that's where the most students are. Then the laydow of 3,4,5 and 6 get made based on how many students are in the class. If 2 has 5 people and 5-6 had 7,people, then they may get squished into the same lane with different coaches, while a Basic 3-4 with 12 people in it may get its own lane. The only 'rule' I've seen is that the Basic 1 is always at the opposite end of the rink from Freestyle. And every rink I've done Adult LTS always had a kids Freestyle on the Adult LTS ice.

Also, if you look in the center, you might have a freestyle and a Pre-free, or a heavily populated Basic 5-6. The laydowns seem to all be based on class size. 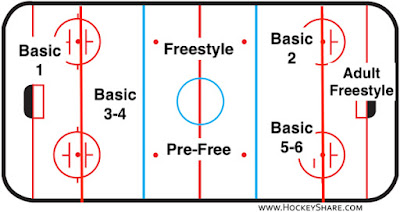 The one distinct usage of the lanes is that they seem to be really good for Basic skills 1 and 2 because the skills can be skated in straight lines. It's not until you get to Basic 3 that the lessons specifically call out for pumps in a circle. IF YOU'RE A COACH IN A LANES LTS IN BASIC 3 AND ABOVE YOU'RE GOING TO NEED A MARKER TO DRAW THE CIRCLE IN THE LANE.

Why if so much of the LTS curriculum requiring skills on the circle, do some rinks use lanes?


Rinks with LTS in circles.
Technically, the ice is divided into patches, usually with a circle in it. Here's an example.  Every class seems to get the same space. The little trick with circles is in the center ice, I've seen like an extra (third) class crammed in there--this has happened to me. Again, the division of classes depends on how many sign up for that class. 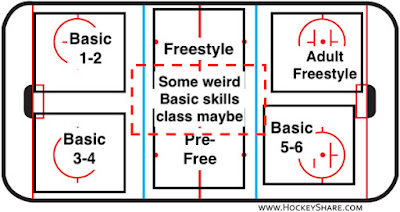 The only problem with circle based classes is they don't benefit Basic 1 and 2 students, who live in perpetual fear of being run over in a circle.

Basic 1 and 2 need lanes. Everybody else needs circles. A full set of classes can use lanes and circles together. And, in real life you can have patches of ice overlap. If Freestyle classes overlap Basic skills classes a little, one expects to have the freestyle skaters avoid the lower level skaters. 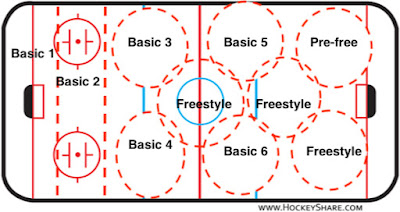 I've never seen mixed lanes and circle laydowns. That doesn't mean it isn't used. I haven't skated everywhere. And of course the skating director does all the planning based on class sign ups, so the laydowns are based on that.

And finally, no matter the best laid plans of the skating director, once the coaches get on the ice, there's a lot horse trading for space.  And sometimes the skating director  forgets to assign space to an entire class. This has happened to me not once, but twice!


Where do I get to Skate?

Posted by Babbette Duboise at 10:07 PM