This is a post about skating terminology a lot of coaches use. I thought I'd introduce it for the skater who may hear something in a group or private lesson and not understand it.

Most of skating is on curves. Very little is on straight lines. It's a convention that the curve you skate on is called 'the circle'. It doesn't matter if you're not actually completely skating in a circle. What counts is that you're skating on a curve that is part of a larger imaginary circle. The term 'the circle' for curves originates with compulsory figures, where skating was done on large joined circles.

Sometimes your coach may say something like, "Face into the circle," or, "Put your free leg in the circle in that turn." What does the coach mean?

Fortunately, I was able to find a photo that can help illustrate that point. 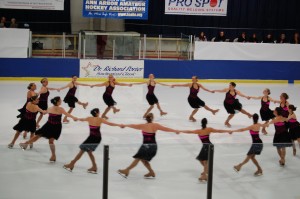 This picture of a synchro team shows the circle, and it shows each girl facing 'inside the circle.' It doesn't matter if they're skating clockwise or counter clockwise, when they skate with their chest towards the center of the circle, that's 'facing inside the circle'.

If you were to see this picture with the girl's backs to the circle, that's called 'facing out of the circle.'

Note that their arms are 'on the circle'.

Suppose your coach wants you to put your forward arm 'inside the circle'? If you're skating clockwise as the girls are in the picture above (I think they're skating forward, though the more I look at it they may be skating backwards--just assume for argument they're going forward), you'll move your left arm so it points at an angle away from the 'line of the circle,' but towards the center. Most times coaches don't want you to point directly at the center of the circle, but just to put your arm inside the circle a little.

What about 'outside the circle'?

One of the prominent places where 'outside the circle' becomes most obvious is when a skater does an 'outside spread eagle'. They will actually appear to be leaning into the circle, but facing out of the circle. 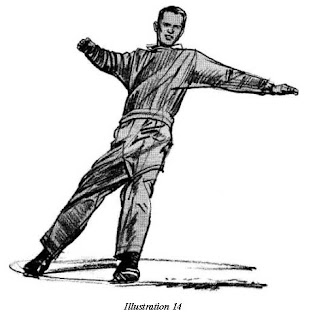 So, there's your little skating terminology tip for the day.


Posted by Babbette Duboise at 8:00 PM

Email ThisBlogThis!Share to TwitterShare to FacebookShare to Pinterest
Labels: advice, the circle