One day after Dance Coach had been beating me up and down the rink, demanding more power, better edges, get the steps in the dances right, do this, don't do that, I stopped. My breathing was deep and hard, my legs were shaking and before my mind could engage, I blurted out "I this wasn't so much fun, I'd quit."

Coach had a belly laugh. "Yes is like that, isn't it."


When things go wrong, as they sometimes will, (Man is the zam broke again?)When the road you’re trudging seems all uphill, (The ice is heaving too?!)When the funds are low and the debts are high, (Typical)And you want to smile, but you have to sigh, (Smile in program, no matter what)When care is pressing you down a bit, (Stupid double sal)Rest, if you must, but don’t you quit.
Life is queer with its twists and turns, (Stupid Choctaw)As every one of us sometimes learns, ($25 an hour for coaching, I'd better learn)And many a failure turns about, (Stupid Back 3s)When he might have won had he stuck it out; (One more round of power threes)Don’t give up though the pace seems slow–(Must improve my edge pulls)You may succeed with another blow.
Often the goal is nearer than, (One more pattern and I'll be finished)It seems to a faint and faltering man, (That fall on the axel is killing me)Often the struggler has given up, (No.No.No.More.Skating.I.Quit)When he might have captured the victor’s cup, (SHE won! I'm better than her!)And he learned too late when the night slipped down, (I could have won that comp!)How close he was to the golden crown. (But I quit) 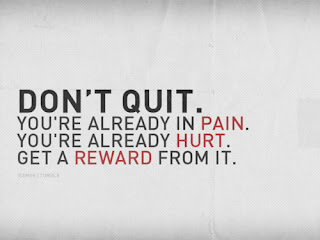 Posted by Babbette Duboise at 4:35 AM